PROTECTING AN AWS ALB BEHIND AN AWS CLOUDFRONT DISTRIBUTION

Reducing the number of entry points into VPCs reduce the surface of possible attacks. Which in the end makes our infrastructures a lot more secure. When an AWS Cloudfront distribution has an AWS Application LoadBalancer (ALB) as an origin, the ALB must be public (internet-facing) and therefore, is by default accessible on all the ports defined by our listeners (usually 80 and 443).

At first glance this does not seem problematic. Without a Cloudfront distribution these ports are already opened to the world (0.0.0.0/0). But in reality we are still exposed to (Distributed) Denial-Of-Service (DoS and DDoS) and Denial-of-Wallet (DoW) attacks.

We could have one WAF on the Cloudfront distribution and another one on the ALB, but this would double the costs and increase the latency, and Cloudfront could still be by-passed.

In the following chart we have 2 different ways of reaching an unsecured internet-facing ALB: 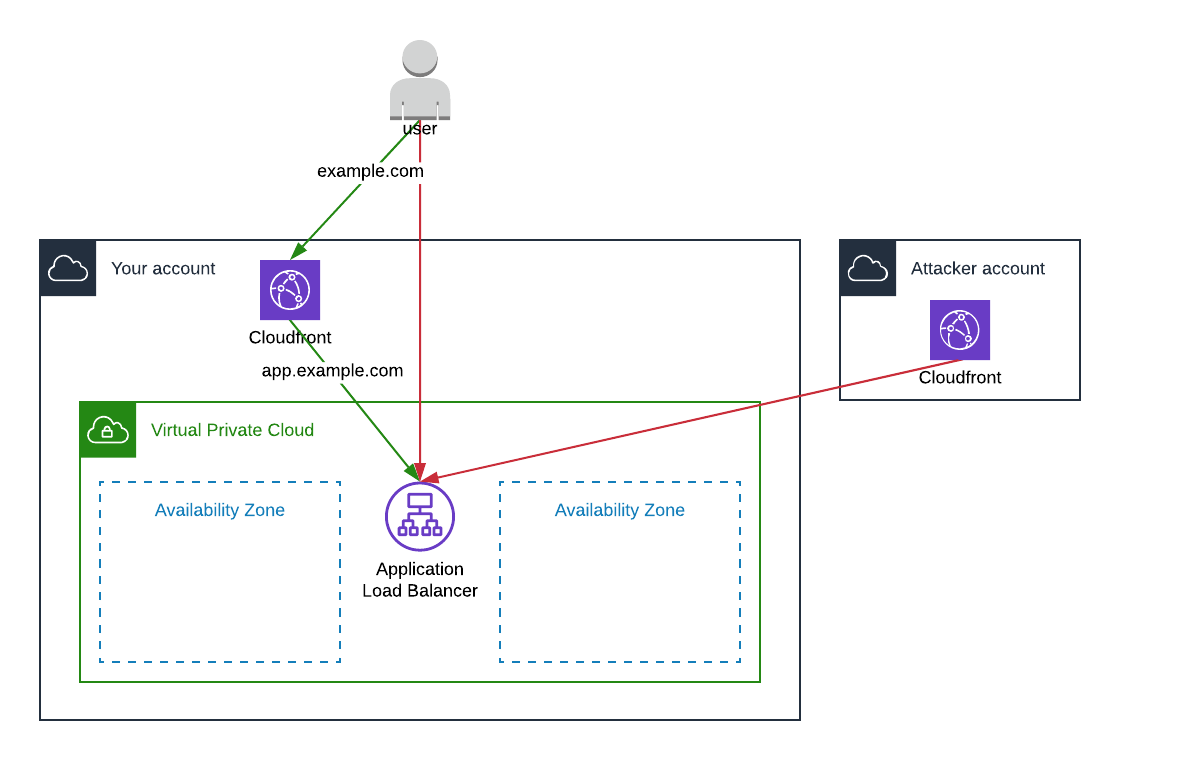 The ojbective of this article is to show how to get rid-off the red lines.

All the source code presented in this article is available in a Github repository.

To have a simple example, for this article the Cloudfront distribution forwards all requests to the ALB and the targets are Nginx servers serving static resources from an S3 Bucket.

Please note that by deploying these stacks, you will be charged for the following resources:

Starting from an initial infrastructure (step_0) where an ALB has a Security group opened to the world and two Listeners which forward all requests to the targets without any restrictions.

The network flow for a regular user would be:

The ALB being an internet-facing ALB, we can access the application using:

Having a reverse proxy being able to serve multiple applications routed by Nginx using the Host header is even worse. Not having example.com in the Host header means that Nginx will fallback to its default page.

Furthermore, nothing forbid anyone to have its own Cloudfront distribution (or any reverse proxy) and use app.example.com as an origin.

Futhermore, in this example we are using CNAMEs:

A simple dig command can return the DNS of the Cloudfront distribution and the ALB. Both DNS allowing us to access the application. It is one reason why Aliases should be preferred when possible, using the principle of “Security by obfuscation”, which is very weak but is better than nothing.

The first (and most important) thing to secure is our ALB. Only Cloudfront should be able to access it.

To achieve this, the ALB Security Group should only allow access from Cloudfront IPs (step_1).

Cloudfront being distributed, it has dozens of dynamic IPs. Fortunately, AWS publishes the IPs used by Cloudfront and has even an SNS Topic triggered every time the IP ranges change. Furthermore, AWS provides the lambda that can update our Security Groups automatically.

The lambda provided by AWS using Python 2 and requiring to have specific Security Group names (cloudfront_g and cloudfront_r), in the github repository dedicated to this article you will find the lambda ported to Python 3 and using a tag SecurityGroupType, instead of Name.

Until now the ALB allowed access to the port 80, which is useless as Cloudfront has been configured to access the origin only in HTTPS:

The 3 Security Groups should be defined as below:

Moreover, having a Security Group without any rule is useful to allow access to a resource from the holder of the Security Group.

ReverseProxySecurityGroup allows access to any resource holding the Security Group AlbSecurityGroup on port 80.

To configure the lambda and SNS subscription, please refer to the Cloudformation template and the README in the repository.

SIGNING A CLOUDFRONT DISTRIBUTION REQUEST TO THE ORIGIN

Where the parameter SecurityToken is a shared value between Cloudfront and the ALB.

Finally, we need to change the default action of the listener:

If a request doesn’t match the HttpsSecuredListenerRule defined previously, the ALB will return a 403 error response.

The last improvement we need is to allow access to the Cloudfront Distribution only with our domain name. And the best way to do this is to use a WAF and attach it to the Cloudfront Distribution (step_3). We could check the Host header at the ALB level, but this check must be done as close to the user as possible, in other words, in edge locations.

With little effort with have secured a Cloudfront Distribution and an ALB behind it.