You are developing an application with a REST architecture and you want to focus on writing the client side without having to set up a database and write the APIs? You are a frontend developer and don’t want to wait for the backend developers to test your application? Or you just want to rapidly create a prototype of your application to show to your customers? Then, Node-RED might be the tool you’re looking for in your next project.

“Node-RED is a tool for wiring together hardware devices, APIs and online services in new and interesting ways.” – http://nodered.org

Node-RED is a visual tool built on Node.js that you can use to rapidly create APIs, http endpoints… Node-RED is a creation of IBM Emerging Technology and has been developed as an open-source project on GitHub, under the Apache 2 license.

How does it work?

Node-RED provides a browser-based flow editor where users drag-and-drop nodes to represent the web services that have to be connected.

Further nodes can be placed in between the previous nodes to

The flow created can then be deployed in a single-click.

This flow is also stored in a JSON file which can be easily shared amongst the developers of your project using your favourite version control system (Git, Subversion…)

The best way to understand is to show an example of what Node-RED can do. So, we will create our first flow which is a REST endpoint returning the information of the authenticated user in JSON. Once Node-RED is installed and running, you can access the editor at http://localhost:1880 (by default) via your browser. Below is a picture of the editor with the flow:

Creating a simple REST endpoint with Node-RED can be easily done in 6 steps (illustrated in the above screenshot): 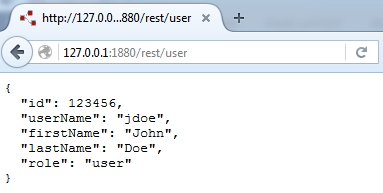 The goal of this second example is to place a function in between the nodes of the first examples. This function will allow us to modify the message of the response by adding some headers. We will also see how we can debug a Node-RED flow. 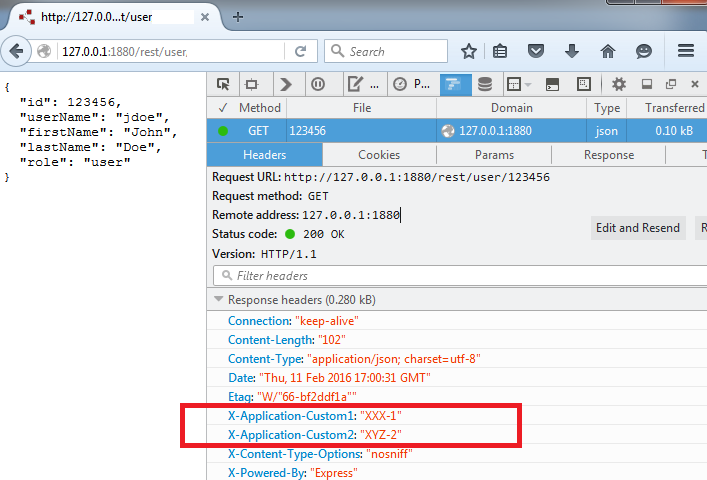 In our last example, we will create a more complex flow. The objective of this flow is to test our application with different types of user (user and administrator in this case) and also to test different scenarios (how does my application behave if the call to the endpoint failed?).

The switch between the different cases is easy as a simple click and doesn’t require to modify the JSON file (which is not a proper way to test your application). It doesn’t even require to redeploy Node-RED.

To achieve such a process, we will require 3 flows (picture below):

The first flow (Part A) is used to inject a pre-defined value by pressing a button in the Node-RED IDE. This value represents the role we want the subsequent HTTP requests to hold (Administrator or User) and is stored in the NodeJS server memory in a store called “global context”. The global context is shared by, and accessible to all nodes. It means that the variable containing the role is now accessible by the other nodes of the application. To test your application as an administrator, you simply should click on the button on the left of the inject node. You don’t have to redeploy Node-RED.

There isn’t any new stuff in the second flow (Part B).

The third flow (Part C) represents the entry point of our API (accessible via “GET /rest/user”). It retrieves the role injected in the global context (Part A)and calls the corresponding flow (depending on the role) in Part B. 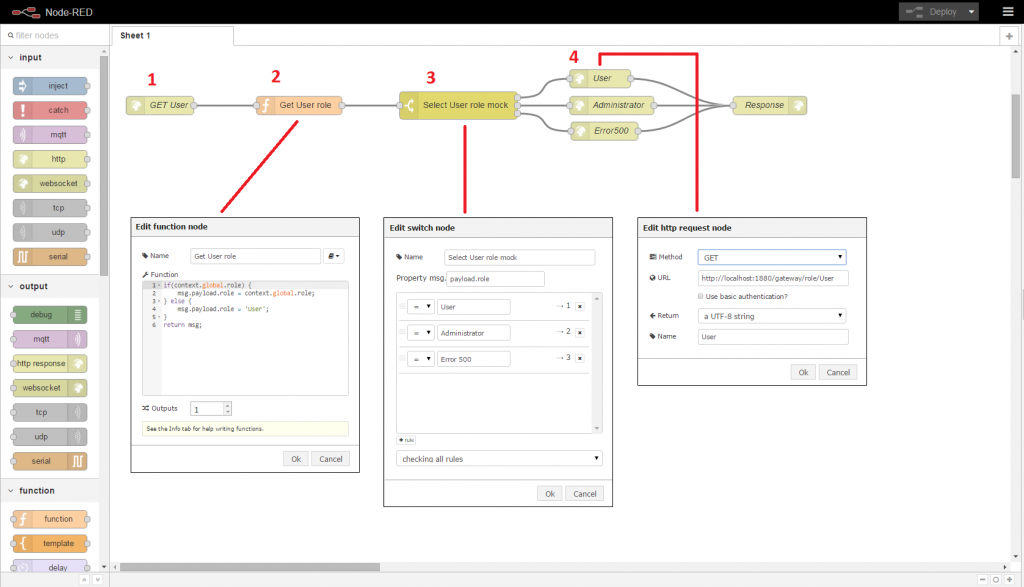 The first node is the HTTP input node which is the entry point of our API.

As you can see in the above-mentioned examples, Node-RED allows to isolate the frontend developers from the backend dependencies by implementing REST APIs, as mocks. This separation enhances the frontend developer’s performance because they can focus on writing frontend code without deploying real backend servers. But this separation has also a cost: setting up the environment, writing the flows and the mocked data, which may take some time.

Let’s finish with some other uses of Node-RED that might interest you: